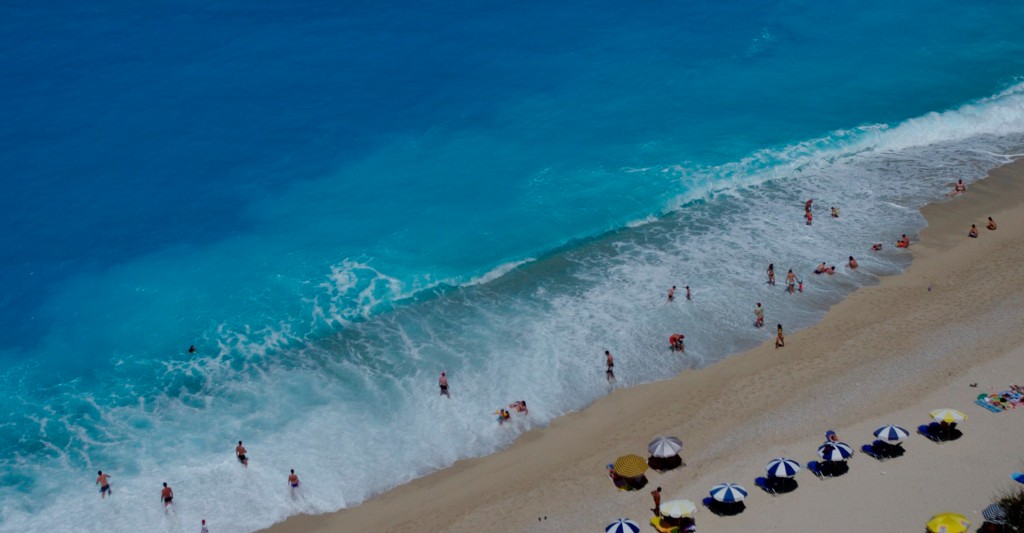 Lefkada, also known as Lefkas or Levkas, is one in the group of the Eptanisa or “seven-islands” in the Ionian Sea in Western Greece. Except Lefkada, the Eptanisa are made up of Zakinthos, Kefalonia, Kerkyra, Paxi, Kythera and Ithaki. Lefkada is the fourth largest Greek island, after Zakynthos, Kefalonia and Corfu. Its capital city is also called Lefkada. The island is separated from mainland only by a narrow canal, Drepanos, 50 meters wide.

There is a long boardwalk and a floating bridge connecting Lefkada with land, which makes it the only Greek island, except Evia, accessible by car.  It is surrounded by nine satellite islands, including Meganisi, Kastos, Kalamos, Madouri and Skorpios, the island of Aristotle Onassis family. Lefkada has an area of about 300 square kilometers and coastline of 117 kilometers.

Population of about 22.000 inhabitants lives on this Ionian island. Every year, especially during summer months, thousands of tourists from Greece and abroad visit Lefkada to enjoy its mild climate, beautiful beaches, spectacular mountains, clean sea, amazing waterfalls, and to explore the island’s rich culture and charming traditional villages.

Lefkas enjoys characteristic Mediterranean climate with mainly wet, hot summers and cool winters. Summer temperatures begin in May and continue through until October. The hottest months are July and August with average temperatures of 25C.

Lefkada is well-known for its impressive coastline with the white sand beaches and the turquoise waters, resembling the tropical paradise of the Caribbean. The lovely beaches and the crystal clear waters are not the only reason for the island’s beauty. Lefkada is a truly verdant island, full of trees and green hills. Even though it has been named after the white mountains which dominate the landscape, the island has rich fauna and flora. The lagoon between Lefkada and the mainland is a protected wetland and perfect shelter for many migratory birds and other rare species. If you visit the island in spring, have a walk in the fields and smell the scents from the various flowers and herbs painting the green landscape in a mix of colours. On the island, there are rare lilies, blue ivies and other wild flowers sharing the fields with wild gum trees, olive trees, lemon and orange trees, aspens and a lot more beautiful plants offering their natural shade to the hikers.

If you love nature, apart from the lagoons and the fields, there are other places worth visiting for their natural beauty. Among them we would recommend the waterfalls of Dimossari gorge near Nidri and the huts of the village Voltoi. The plateau of Eglouvi is definitely a must, where you will not only be stunned by the scenery but you will also learn how the rare lentils of Eglouvi are grown.

The Village of Vasiliki

It is one of the most popular, touristic destinations in the island and is 40 km S from the town of Lefkada.

Its bay is ideal for surfing and its island atmosphere is quite charming. From here you can visit the villages of Agios Petros and Sivros so you can taste the traditional plates with lamp, you can go swimming to the beach of Vasiliki or you can take the small boats for the beaches of Porto-Katsiki, Alektori and Agiofili.

Some of the most beautiful beaches in the island to visit…

Agiofili beach is situated 38 km south of Lefkada Town and close to the village of Vassiliki. This is one of the clearest beaches in Lefkada with brilliant crystal waters and white soft sand. It is surrounded by white stone cliffs that create a beautiful setting and a feeling of seclusion. A nice trekking path connects Vassiliki with Agiofili. However, it is suggested to access the beach by a boat from Vassiliki. You will definitely enjoy this short trip.

Agios Ioannis beach is the closest beach to Lefkada Town separated only by a couple of kilometres. The long beach stretches for many metres and it is surrounded by golden sand and blue green waters.The area boasts an exotic landscape which attracts thousands of visitors. It is well-organized with sunbeds and umbrellas facing the wonderful sea. Agios Ioannis is home to some old windmills that create a charming atmosphere. The beach here is usually windy thus the ideal destination for windsurfing after Vassiliki. It attracts many skilled windsurfers.

Gialos is a long beach on the island of Lefkada in Greece. A narrow road leads down to it and you can drive all the way down to it. The sand on the beach is a bit rougher compared to other beaches in the area. The bottom where we stayed was made up of a bit larger stones rather than sand and was not ideal for bathing and swimming. Since it is quite a long beach other parts might however be better and its great length means there is lot of space between visitors. A small stretch at the start of the beach had sunbeds to rent.

The road to Egremni in one section is unpaved and narrow, therefore it can sometimes get congested during the middle of the day in high season (August). This beach has no parking lot, so you park on the side of the road. Unfortunately to reach the beach you have to descend down 347 steep wooden steps, however it is well worth it. The staircase is sturdy, but it is recommended to have good shoes.

Kathisma, meaning “seat” in Greek, is a beach located in the northwest region of Lefkada, near the village of Agios Nikitas (about 2 km away). There is a paved road all the way to the beach and a parking lot next to the beach where you can park for free or along the side of the road. There are buses from Lefkada Town right to Kathisma.

Below Poros village, a peaceful and attractive beach with pebbles where the sea is unpolluted, in sheltered Rouda Bay and nearly always calm. There are camping sites, hotels and restaurants in the area.